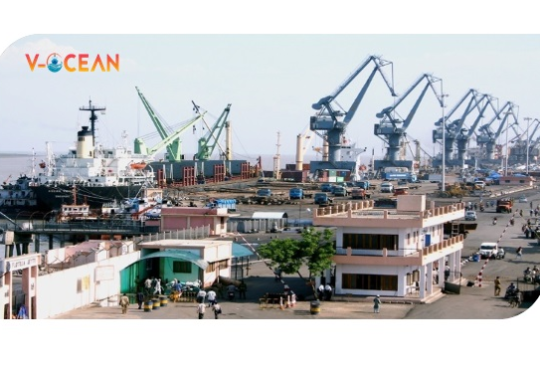 Kandla, also known as the Kandla Port Trust or Deendayal Port Trust is a seaport in Kutch District of Gujarat state in western India, near the city of Gandhidham. Located on the Gulf of Kutch, it is one of major ports on west coast. Kandla was constructed in the 1950s as the chief seaport serving western India, after the partition of India and Pakistan left the port of Karachi in Pakistan. The Port of Kandla is located on the Gulf of Kutch on the northwestern coast of India, some 256 nautical miles southeast of the Port of Karachi in Pakistan and over 430 nautical miles north-northwest of the Port of Mumbai (Bombay). It is the largest port of India by volume of cargo handled. Kandla Port Trust, India's busiest major port in recent years, is gearing to add substantial cargo handling capacity with private sector participation. The west coast port handled 72,225 million tonnes of cargo in 2008-09, over 11% more than the 64,920 million tonnes handled in 2007-08.